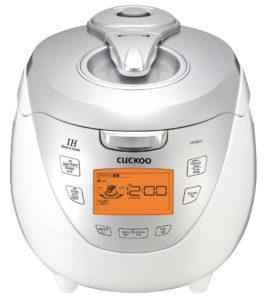 It’s no secret that the rice cooker Cuckoo Brand has been a top favorite in the world of rice cookers. Let’s take a look at the wide variety of Cuckoo Rice Cookers, and see what makes them unique. 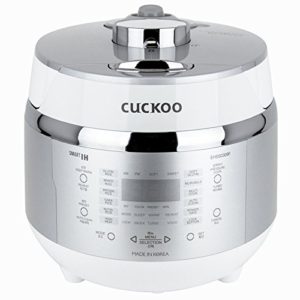 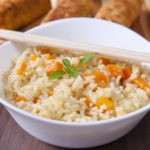 Such an induction heating pressure rice cooker will assure your rice stays fresh not just for hours,  but that the rice stays fresh for days! You will be happy to learn that you have  lots of cooking options.  If you are a beginner, don’t be worried. You will learn quickly how to cook rice in induction stove. Once you buy induction pressure rice cooker, you will also receive a rice paddle and a measuring cup included in the price.

What Is a “Induction Heating” Rice Cooker?

Induction heating is the most advanced heating technology. It has numerous applications such as industrial and household appliances of various kinds including electric rice cookers. Induction heating is a non-contact heating process using radio frequency electricity through an electrical conductive material.

There are several differences between regular rice cookers and induction rice cookers. The induction heating rice cooker needs the inner container as that pot will be entirely heated up instead of a common rice cooker which will heat only the bottom of the external vessel.

The induction heating rice cooker is a “smart machine” that is designed to be able to make instantaneous and precise adjustments in heating. This means that you can adjust the temperature or the power, and every time during the cooking process the induction heating rice cooker to adjust to an evenly heated status throughout.  This method of heating prevents the rice from clumping and also produces fluffier better tasting rice.

The rice cooker with the more advanced induction heating system naturally costs more, is also heavier, and consumes more energy than a “fuzzy logic” rice cooker.  However the IH rice cookers make the rice much more quickly. Moist IH rice cookers have different heating levels you can adjust easily.  And another great feature is that you don’t have to keep checking on the rice and watching it as it cooks. You can set it and forget it.

Also with induction heating, these type of rice cookers use pressure cooking as well.  The pressure and heat can be adjusted according to the type of menu, dish or type of rice you are cooking.  This is really great if you your want to cook a variety of styles of rice such as white rice, Sushi rice, brown rice, Jasmine rice, short brown rice or wild rice, for example. 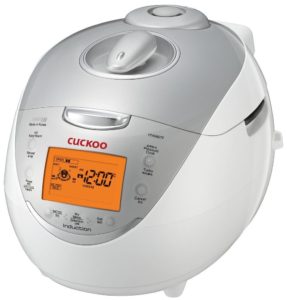 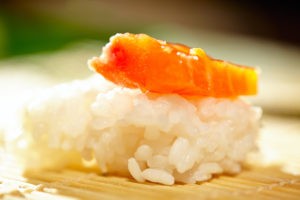 Ships from and sold by Amazon.com in easy-to-open packaging. Gift-wrap available.

“I have used this rice cooker for 3 weeks, and am glad that I purchased this. I have eaten white rice for more than 40 years, and used various brands such as Zojiruchi, Tiger and even Aroma from Costco.

It cooks rice to a perfect condition, shining and tasty. I generally cook white or half white/half brown. Cooking 2 cups of white rice in their turbo mode only takes 14 minutes. Taste of rice “just cooked” is better the one either microwaved or kept warm since yesterday. (I also considered Zojirushi’s NP-NV10 which is also IH pressure cooker since it has “Keep warm for extended period”, but chose Cuckoo. With fresh cooked rice for 2-3 servings in 15 minutes, I do not need old rice cooked & kept warm for several days.)

I was also considering Cuckoo CRP-N0681F which has all the same features except IH. Since IH heats the entire pot instead of bottom portion only, rice cooks faster and more evenly. If you usually cook small servings of white rice, you may not notice this difference with pressure cooking. This version has voice navigation in English, Chinese and Korean whereas CRP-HV0667F in Korean only though more expensive. (strange…)

I also considered Cuckoo CRP-FA0610F due to its price tag of $200 which is a pressure cooker. This model does not allow its cover detached for cleaning, which may make cleaning harder. Both CRP-HV0667F and CRP-N0681F provide easy self cleaning mode with some vinegar. Regular cleaning is important to have fresh taste rice cooked all the time.

If you mix some brown rice for healthier choice, please remember to add some more water not to have hard rice. With pressure cooking, I did not need to wet the brown rice in advance, and still had a “perfectly” cooked rice.”

“My boys love to eat white rice (short grain sushi rice). I have been using a $100 Tiger rice cooker sold by Costco for years. Its nonstick coating fell off a little bit recently, so I decided to use the opportunity to upgrade. This Cuckoo pressure IH cooker does cook rice better than the old Tiger. My white rice now is shinier and more chewy than the rice cooked by the old Tiger. The difference is obvious. If rice cooked by this cooker scores at 100, I would say my old Tiger scored at 85. However, whether this 15-point difference is worth the additional $250 is a personal opinion. For people who treat white rice as the main dish (like in sushi), I am sure the difference is night and day. At the dinner table, I focus on salty dishes (meat, vegetables, fish…). White rice is secondary and complimentary. I don’t regret my purchase because my boys like their rice better now and this cooker makes their dinner a little tastier every day, but I would not have spent this much on white rice without them. This cooker does have many other functions, such as brown rice, rice soup, mixed rice…, but none of these fits our daily routine. I guess if you are a person who cares dearly about your rice, this Cuckoo is the one for you.” 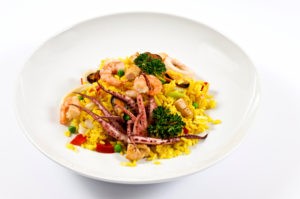 Seafood with the rice isolated on white 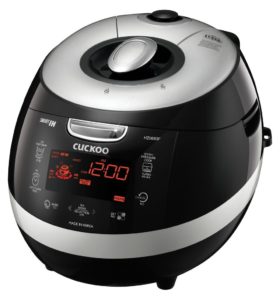 It is said the Koreans are really the experts on rice cookers.  Here is a satisfied buyer who definitely agrees with that opinion, and voiced his review on Amazon:

“I used to buy instant brown rice all the time because I thought that cooking brown rice was a serious pain, even with a rice cooker. You’d have to plan ahead, soak the grains and well, if you want to cook a single serving, you’re out of luck. One day I walked down the rice aisle of the Korean supermarket and did some math. I realized that I was paying $1.50/bowl of rice, when I could be paying $0.10/bowl of fancy mixed rice (15 lb bag @ $12 which yields approx 120 bowls cooked). I then walked down the rice cooker aisle and spotted this gem of a rice cooker… it was sort of a crazy impulse purchase, but I figured that assuming I used it, I’d break even in about 6 months. I’d say I have no regrets.

When I was comparing rice cookers at the store, the main competitors to this model were the Zojirushi NVC-10 (the only Zojirushi model with induction+pressure), and the older Cuckoo HS-0657F. I decided on this model against the Zojirushi because the Cuckoo was slightly cheaper, it seemed that Cuckoo’s pressure+induction technology was more mature, and from what I’ve read Cuckoo cookers use slightly more pressure, resulting in more gelatinous/glutinous rice (my preference). The pot in the NVC-10 also seemed quite a bit thinner than than the Cuckoo pot (and this is confirmed by NVC-10 amazon reviews). This model was slightly pricier than the HS-0657F, but that model only speaks Korean, and I wanted a model which could speak English.

The first serving of mixed brown rice it cooked was perfect, way better than the microwave brown rice I was eating. Every kernel was very soft and glutinous, and it cooked in less than 50 minutes without any soaking (it cooks in 30 on the turbo function… which is almost as good). I refrigerated the leftovers and microwaved it for lunch the next day, and I would say it was just as good. The diamondX coating cleans very easy and usually a 10 second hand rinse makes it new again. The rice cooker can also double as a pressure cooker in the ‘multi-cook’ mode – I’ve cooked hard-boiled eggs and tea eggs in 25 minutes and super tender slow cooked pork in a hour using the pressure cooker function. It also says that it can make bread, which I’ve been itching to try – according to the website you can make chocolate cake… so it’s way more than a rice cooker… and yet super compact. It also makes germinated brown rice (GABA), which is supposed to me more nutritious. And then there’s the porridge setting and the ferment setting…

The voice function is surprisingly useful and very… cute (it … sings?). The rice cooker has a lot of functions, so the voice prompt helps navigate. It also warns you of system problems (please empty the overflow bin or please lock the lid…), which is better than pulling out the manual and figuring out what to do.

If you’re hesitating to buy this because it’s a Korean branded ricemaker not that well known in the states, I’d say pull the trigger. Cuckoo is a very well respected brand in Korea, and I can assure you Koreans know how to make their rice. And this model has a super sleek design, to boot. The rice that comes out of this rice maker is wayyy better than even restaurant rice.” 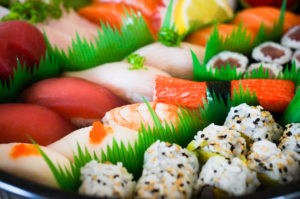 Have you had Zojirushi before and how do these two brands compare? quality of rice? pros and cons of each brand. thank you. 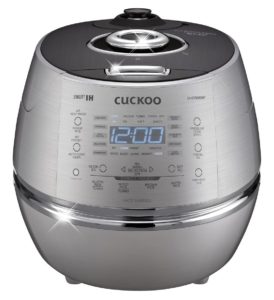 Here are comments from happy customers from Amazon:

“At first I was hesitant about buying such an expensive rice cooker, but my family goes through several bushels of rice a month so I didn’t want to mess around. After all, these puppies can last you a decade so why not invest a bit more?

I was pleasantly surprised by the quality of this Cuckoo and look forward to every single bowl of magnificent rice this machines churns out. The rice tastes amazing and you have a variety of cooking options. I had no idea there were so many different ways of cooking rice. The learning curve is a bit higher than your average rice cooker, so taking a read through the instructions is recommended.

“This cooker makes GLORIOUS rice. Every time you open the cooker after completing a cycle, angels sing and you see the most beautiful rice you have seen from a rice cooker. It is not quite like the rice you see at restaurants in Asia, like Japan or S. Korea, but it is dang close. If you really want some awesome rice also try the Gaba rice setting. I somehow found some Gaba rice that is mostly white, but you can still see the seed cracks. It took 3 hours but the gaba rice setting made the rice so soft and chewy that you can eat it alone with no seasoning or anything. It is expensive, but it is worth it if you eat rice mostly every day of the week.”

Click on the link below to buy on Amazon:

This rice cooker has a X-Wall Diamond Coating (Inner Pot). Also has:

Yes, the Cuckoo Brand is one of the all time favorite Rice Cookers. Now you know why! Make your selection here to add to your kitchen, and enjoy the some of the most perfect cooked rice you can possibly get!

This site uses Akismet to reduce spam. Learn how your comment data is processed.