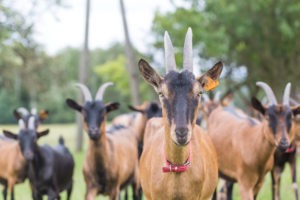 They say that the discovery of coffee had to do with a herd of goats!

The Discovery of Coffee–Truth or Legend?

The colorful and interesting story of the discovery of coffee goes back centuries to the country of Ethiopia. At that time ancient coffee forests grew in the wild upon the lush hills of the Ethiopian plateaus. It was around 850 A.D.

One day a young goatherd named Kaldi seemed to be managing his goats in the usual way on a normal sunny afternoon.  He noticed that his goats wandered off into some colorful looking bushes with red berries on them.  Not thinking too much about it he went along with his normal duties.

After awhile he called out to his goats to move on. Normally they responded, and even knew their names when he called them.  But not this time.  Kaldi went up the hill to check further on how his goats were doing.  When he came upon them he found his goats to be acting very strangely.  There were leaping up in the air kicking and even butting heads with each other. They seemed to be acting in a wild and strange way.

“What has become of my goats?  Are they bewitched?” Kaldi wondered. They were very interested in staying in that one spot, and grazing on the bushes there.  Kaldi could not seem to herd his goats to come with him back to the normal pasture.  He finally had to give up on them, and leave them in that location for the night.

When he came back the next day they were still grazing in the same location, and acting the same way, jumping, leaping  and dashing around with unusual energy. I guess we might say today that they were acting “super-caffeinated.”  The goats did not seem to sleep hardly at all.

Kaldi couldn’t resist trying them himself.

You guessed it. He got to feeling pretty high and pretty weird right away.

Kaldi took the berries to an Abbot at a nearby monastery, and told him about what happened to his goats.  Upon studying Kaldi, the Monks though perhaps it was him  that was acting bewitched!

“Those berries are of the devil!” the Abbot exclaimed, as he threw the beans into the fire.  The aroma of roasting beans quickly filled the room. The pleasant coffee aroma could hardly be ignored.

Later, the Abbot tried boiling hot water and adding the berries to make a drink.  The result was that the Abbot an the rest of the Monks hardly slept at all that night after drinking the mixture.  He decided that it was good to use the drink to keep him awake during long hours of evening prayer. . . or to awake in the early morning for his prayer and duties around the monastery.  He soon told the other monks about it.  As you can imagine word of such a good thing spread very quickly!

Although this story is sometimes referred to as a “legend,” it sounds like the truth to me!  Here is another version if this story you might enjoy!  Click on the link  above to view it from the www.gocoffeego.com  site.